When the elevator shafts were blasted and drilled in the limestone in Carlsbad Caverns in the late 20's, the work crews blasted from both above and below and met in the middle with amazing accuracy. Well everything that was blasted from below was taken into an area that was once used as a "Lunch Room" in one end of the "Big Room" nearest the present day "Lunch Room" and all of this rock rubble covered the original floor. In an area called "Grape Arbor" in 1986 the CRF (Cave Research Foundation) started uncovering this original floor and discovered that there were formations and tiny rimstone dams that were hidden. This planted the seeds and set in motion the current rock haul restoration project that exists today.

The first official rock haul for the PBSS was November 21, 1992. There was a nice article written for the Texas Caver by Gralin Coffin (Sept. 1993) about the PBSS first rock haul. The PBSS has a rock hauling trip at least three or four times a year. Other groups that have helped out in this ongoing project have include the NTSS out of Wichita Falls of course the CRF does a rock haul every year or so.

Many artifacts have been uncovered during this rock haul and those include, cups, creamers, old ketchup bottles, toothpicks, matchsticks, chicken bones, blasting wire, rotting timbers, blasting caps, and lots more! 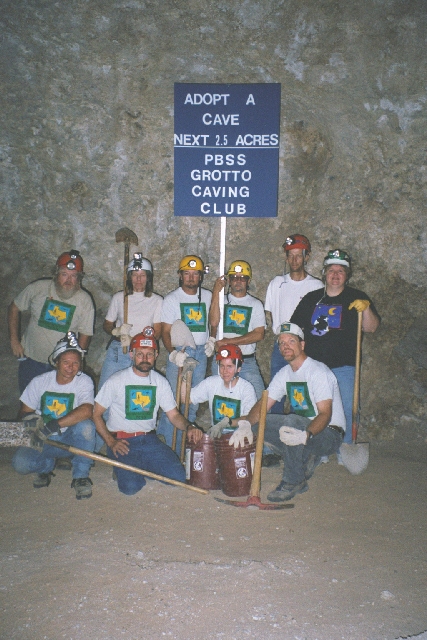 This page is under heavy construction!
I am working on it when I can and will soon be adding pictures
Bill

Copyright © 1995-2020 Caver.net   Comments to webmaster&#64caver.net.  Cavernet is neither owned by nor operated by the National Speleological Society.
Cavernet is supported through donations from various and sometime notorious and anonymous speleological entities.